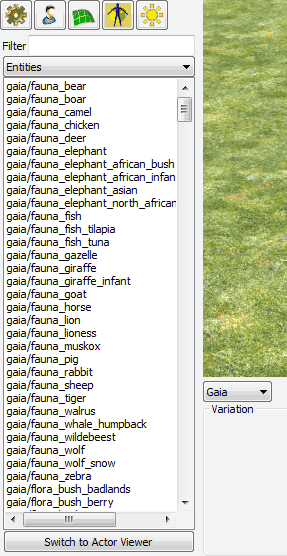 The contents of the Object tab

The object tab is where you can add objects onto the map. Objects can be everything from houses to units, from animals to trees. While there are a lot of objects, and for some of them a number of variations too, there isn't that much that need to be explained. The objects in the list to the left may be chosen by left clicking on them and then to place them on the map just move the mouse pointer there and left click to place it. Most objects can be rotated while placed, just click-and-hold the left mouse button where you want to place the object, move it around until you've found the rotation you're looking for. Don't worry if you don't get it right though, it's very easy to rotate the objects after you've placed them (see the Move/Rotate tool above).

Enter part of the name of the object you want to use.

When viewing actors (all objects and props):
special: Only show special objects.
props: Only show objects being used as "props", that is as part of bigger objects or to add variety to other objects. Could be useful for viewing individual props in the Actor Editor (see below) or if you want to use some props for eyecandy.

Most of these works well enough if you just enter the first few, but depending on how much you want to scroll through the list/what other filenames/paths might get added in the future you might have to enter more or less of them.

Choose between Entities or Actors using the dropdown. By default Entities are selected. For map design purposes the easiest way to think about entitities and actors is probably like this: Entitites are objects that the player can interact with in some way, actors are only visual. An example: a tree that's placed as an actor is just there for looks, you cannot gather wood from it, neither can it be destroyed. A tree placed as an entity can be gathered from and destroyed. So if you want to design a town where you don't want the player to change the look of it by chopping down trees you would place them as actors. Remember to put some trees as entities though in case you want the player to be able to gather some wood on this map.

Allows you to choose which player the unit/building belongs to. You can also switch player by pressing the corresponding number key: 1-8 for normal players and 0 for Gaya.

Note: Currently not enabled. Some objects have variations you can choose from. You can do that after placing the object by selecting it using the Move/Rotate tool and then choosing between the different options in the dropdown button.

The Actor Viewer is handy if you are editing a model and want to get some useful info and preview the model in different ways. It is launched by clicking the Switch to Actor Viewer button which can be found below the objects list. 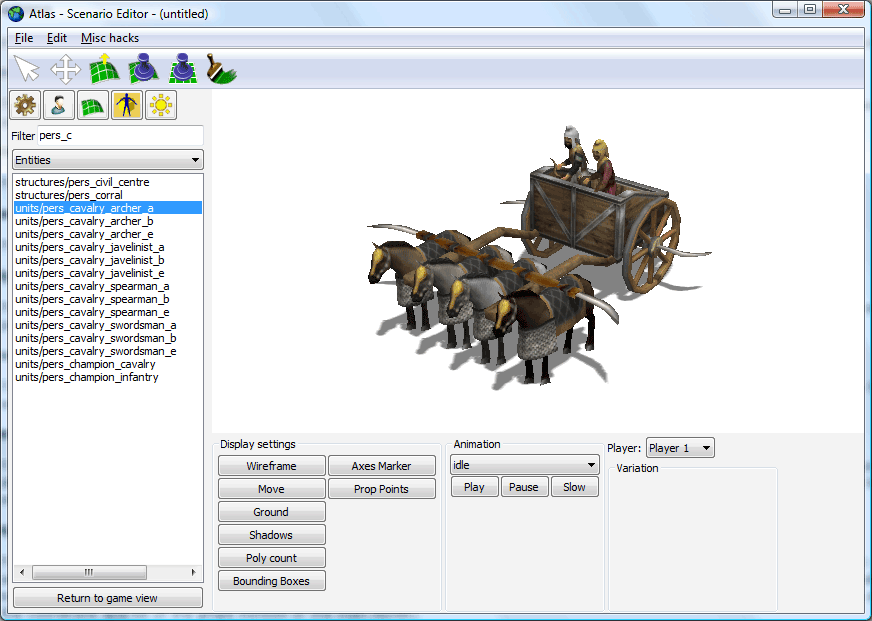 In the area where the map is displayed when in game view you see a preview of the object (actor) selected in the list to the left. Below the object list is the "Switch to game view" button which takes you back to the normal game view (Please note that some settings changed in the Actor Viewer carries over to the Game View, i.e. Wireframe and Polycount).

Keyboard adjustments You can control all these mouse controls by using different keyboards adjustments. Pressing the Ctrl key while doing any of the above makes the effect smaller, i.e. you have to move the mouse further to get the same amount of rotation/zoom etc as without the key pressed. The Shift key does the opposite allowing you to get more done with less effort, and pressing both keys at the same time gives you the finest control.

Pressing this button allows you to toggle between displaying the object as a wireframe and displaying it as a solid model with the in-game texture.

This button toggles how the movement of units is displayed when playing an animation. The default is that the unit stays in the same place on the screen while the animation plays, but you can get the unit moving forward in relation the screen by this toggle.

Toggles the display of a ground plane.

Toggles shadows off and on.

Toggles the display of the actor's selection bounding box. When active, the bounding box outline that is displayed corresponds to the actual selection shape that will be used in-game. Useful for inspecting overly large or small selection shapes for particular units/buildings.

Toggles the display of an XYZ axes marker, as commonly seen in 3D modeling tools. The marker is located at the origin of the actor's object coordinate space, and displays the unit vectors on the X, Y and Z axes in red, green and blue, respectively. Useful for inspecting an actor's model origin location. And since the axes marker is always the same size, a quick way to get an idea of its scale.

Toggles the display of markers at the location of model prop points. Prop points are where submodels are attached to their parent object. When this setting is active, all prop points in the current actor's model hierarchy will be marked with a pink dot. Pressing the button again will additionally display small axes markers at each prop point, indicating the axes directions of the attached prop's object coordinate space (similar to the Axes Marker setting above, except that these show the coordinate spaces of the props instead of the main model).

Note that these markers were intentionally made smaller so as not to clutter up the screen too much; unlike the main Axes Marker outlined above, the lines of these markers are not of unit length. They serve primarily to inspect the orientation of props when attached to their parent model.

Allows you to choose which player the unit/building belongs to. Can among other things be useful to determine whether the different player colors looks good on your model. You can also switch player by pressing the corresponding number key: 1-8 for normal players and 0 for Gaia. (Currently only works when the preview window is in focus, but should work even in other cases eventually.)

The dropdown allows you to choose between the different animations for an object. And the buttons below allows you to: Play the animation, Pause the playback, and Slow plays the animation at 10 percent of the normal speed. Currently the list displays all possible animation types in the game though, and all objects doesn't have all animations, so that's why you might not see any effect from changing the animation. (Buildings, flora doesn't have any animations at all at the moment, and only citizen soldiers have the different gather animations. Among other things, but it's generally fairly easy to guess what objects have what animations, and if nothing else you can test by choosing an animation and press play.)