Getting started and basic tools

In the Alpha and later releases you can either start Atlas by clicking the scenario editor in the main menu of the game, or - and this is the way to do it in case you've checked out the game using SVN - launch it directly by following the below directions: Assuming that you're on Windows, go to the \binaries\system\ folder in your 0A.D. folder and check for the file called "Atlas.bat". Double click that and you'll see a command window, don't worry though, you don't have to write commands to edit 0 A.D. maps (The 3D world in which the game takes place is known as a map, and both words will be used in this tutorial), it's just loading the program in the correct way. In some seconds you'll see the actual Scenario Editor itself.

If you're on Linux you can run Atlas by running:

in a terminal window (replace "/path/to/0ad/" with the actual path to the folder where 0 A.D. is installed). The rest should be the same for all operating systems. 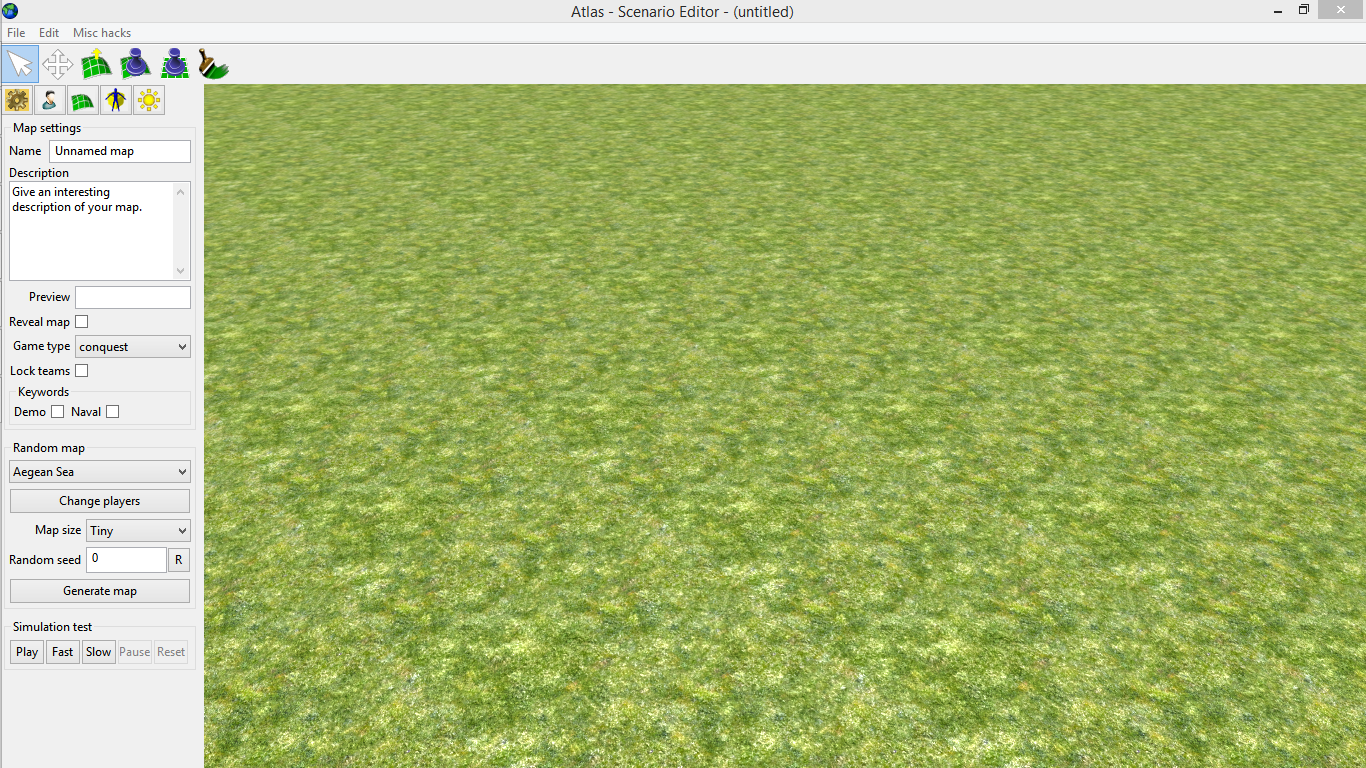 This is a picture of what Atlas looks like at startup, at the top is a menu, to the right a display of the map (3D world), to the left there is a panel with some tools and below that there are tabs which can be selected to display more tools and options.

It may seem overwhelming when you first take a look at the different tabs, but don't worry, most things are fairly straight-forward and you'll learn a lot just by playing around. In this document you'll however find descriptions for how things are done to guide you on your way into Atlas and map making.

These are the main tools which are always available, regardless of what tab you have selected. Some tools are best used together with their appropriate options, so be sure to check what tool is selected in case things don't work as you thought they would.

From the left to right they are:

Which doesn't do much at all, but that is actually good in some cases, as it allows you to move around in the 3D world without having to worry about changing things without being aware of it. That gives the opportunity to talk a bit about the possible ways to navigate in the 3D world.

Navigating in the 3D world

Using the arrow keys on your keyboard you can move forwards/backwards/sideways, with the use of the Shift and Ctrl keys you can affect the speed of that movement:

As in-game during a match, the WASD first-person shooter movement keys also work in Atlas to move the camera:

Shift and Ctrl keys have the same effect on these as they do with the arrow keys.

The scroll-wheel on your mouse is used to zoom inwards/outwards and the same keys affect the zoom as the moving i.e.:

Using the middle mouse button and clicking-and-dragging allows you to pan the view. If you think it sounds very much like moving in the 3D view the difference is that here it is the map that is moving, but when you use the arrow keys to move it is you who move (or rather the in game camera that moves to show you different parts of the map).

And finally there are two more ways to rotate the map:

Both do the same thing i.e. rotate the map. The map is rotated around the point where you click, but in case you find that confusing just rotate until the map is rotated in the way you were aiming for.

The Move/Rotate Tool is what you use when you want to either move or rotate objects (everything in the 3D world/map except the terrain are objects). To move/rotate, first select the object you want to manipulate by left-clicking on it, or by dragging a selection box over them. To select actors (visual objects with no gameplay impact) press the Alt-key and then left-click or drag with the left mouse button pressed.. After selecting the object you can use the left mouse button to move the object and the right mouse button to rotate it. If you right click after selecting an object it rotates to face in the direction you clicked and if you press and hold the right mouse button while moving the mouse around the object rotates with it. 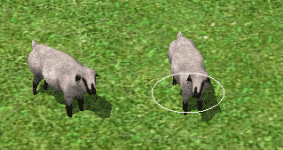 As you can see in this image the selected object has a circle at its base, for buildings it's a square. As it changes with the player color (different colors used to distinguish the objects (houses, people etc) belonging to one player from objects belonging to another player) it might be difficult to see in some cases (i.e. when the player color is near to green and the terrain is green), but you quickly notices which object is selected when trying to manipulate it.

To delete objects select them using the Move/Rotate tool and press the Delete key on your keyboard.

When in the Move/Rotate tool, you can select objects and press CTRL+C to copy a selection. The selection will be copied as text to the clipboard (and can be edited and re-copied in a text editor). After that, you can press CTRL+V to have the paste preview, and click somewhere to paste. The paste will also be selected after pasting, in case you want to fine-tune it more. Press escape to get out of the paste preview mode.

The Area of Influence 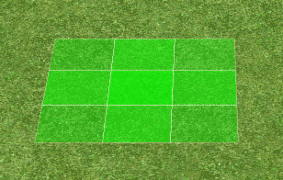 The area of influence, displayed as a bright green grid

The Alter terrain tool affects a greater or smaller area depending on settings on the Terrain Tab, we will look closer at that later but for now it's enough to know that it's possible to change and that you can see how large part of the map that will be influenced by looking at the bright green grid on the map. You can also see how much it will change the map in different parts of the grid, the more transparent the tile in the grid is the less the terrain below it will be affected by the tool. 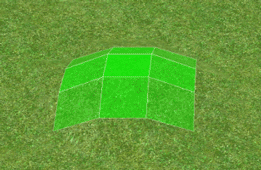 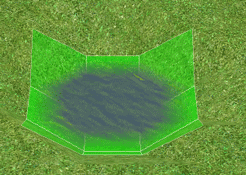 As you can see in this picture the terrain is raised/lowered a bit even outside the area covered by the grid, that is to make things smoother. Sometimes that's not enough however and you need to smooth things out, that leads us to the next tool:

The Smooth/Flatten elevation tools are used when the terrain needs to be smoothed/flattened, and literally flattens the terrain. To use them, just click using the left mouse button on terrain you want to flatten/smooth. It is affected by options on the Terrain tab and more info on those can be found in that section of this document. The Flatten elevation tool is extra useful to flatten terrain under large entities (like structures) so that they don't appear like they are floating. The Smooth tool can also be used to roughen things a bit by using it with the right-mouse button instead of the left. It only affects areas you already have edited though (you can affect other areas by starting in the area you've already raised/lowered the terrain and move into the rest of the map). 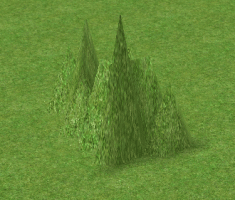 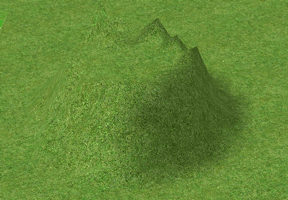 The result in the image to the right above has been obtained by repeatedly clicking with the flatten elevation tool and as you can see the terrain is much smoother now. What level the terrain gets averaged at is depending on where the center of the grid is (see The Area of Influence above for an image of the grid) and thus you can get different results if you put the center of the tool on a higher area versus a lower area.

The Paint terrain texture tool is what makes the map look more like the real world. There are many textures, and it takes some experience and a lot of patience to get it really good, but the basics are really easy to learn. You'll have to wait until we get to the Terrain Tab to get more info, as this tool really depends on the settings there and isn't really useful without them.