The Alpha 20 rmgen2 maps provided by _kali, most prominently Ambush place bluffs and mountains that avoid the player civic center in a perfect circle.

This looks quite ugly and it should be possible to use the ClumpPlacer or ChainPlacer to generate a more randomized land. Then it should be placed completely if it doesn't conflict with player territory - or otherwise not be placed at all.

The circle comes from the fact that a big circular area around the player is ignored by bluffs, so that the playerbase, starting resources and starting walls are all on the same ground.

So the first step is easy: change it from a circular avoidance to a ChainPlacer (many circles of different sizes and locations, creating a non-regular pattenr).

But the irregularity of that implies that we can only ensure a small playeraera so that sometimes a single giant bluff entirely surrounds a playerbase with impassable terrain, locking that player in.

Setting the fail-fraction of the bluff from 50% to 0% (i.e. a bluff can only be placed if all of its points avoid the player) would solve these issues. But it is not possible currently due to performance issues. It would be an infinite loop or consume half an hour or more...

So I decided to go for a workaround and place a ramp from the starting base to a nearby bluff. It solves the issue and in most cases changes the gameplay for good. Bluffs now have to ways to enter a mountain. This means it's less a defensive turtle game and there is more competition for these mountains.

But in few cases passages on the ground are blocked by the ramp. Another thing I don't like is that terrain entities (trees) have to be removed from the ramp. This is bad practice and usually first the terrain should be placed, then entities, rather than changing ones mind in the middle of the map generation. But rmgen2 is not designed for these things (addBluffs adds the terrain + entities in one go).

At the end of the day the circle patterns are so ugly and the circumstances forcing me to use the workaround. With more days of development to spend, more performance improvements and cleanup of rmgen2, the situation might change.

Another thing I have done in this patch is trying to improve the performance. Tileclasses constraints have a very bad complexity. So in this diff I reduced the time measurably but not sufficiently (still can consume a minute loading screen time) by marking the area bluffs should ignore after painting these areas (rather than recomputing these areas each time the constraint is tested). This adds a lot of code (20-30 lines), but I'll keep it now. It can be removed in case we develop a more general approach (Static constraints? multi caches for constraints? #5011)

how it looked before 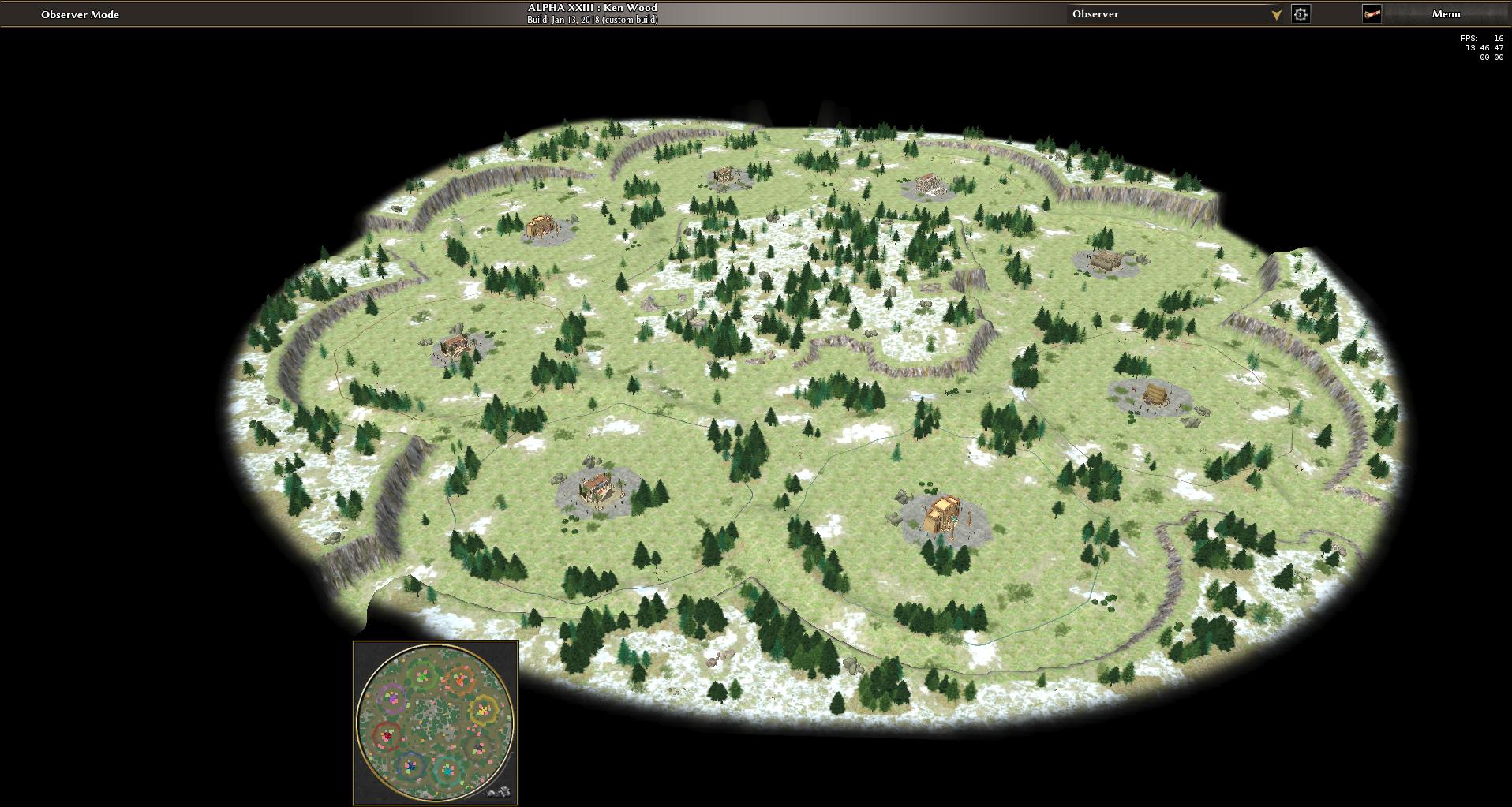 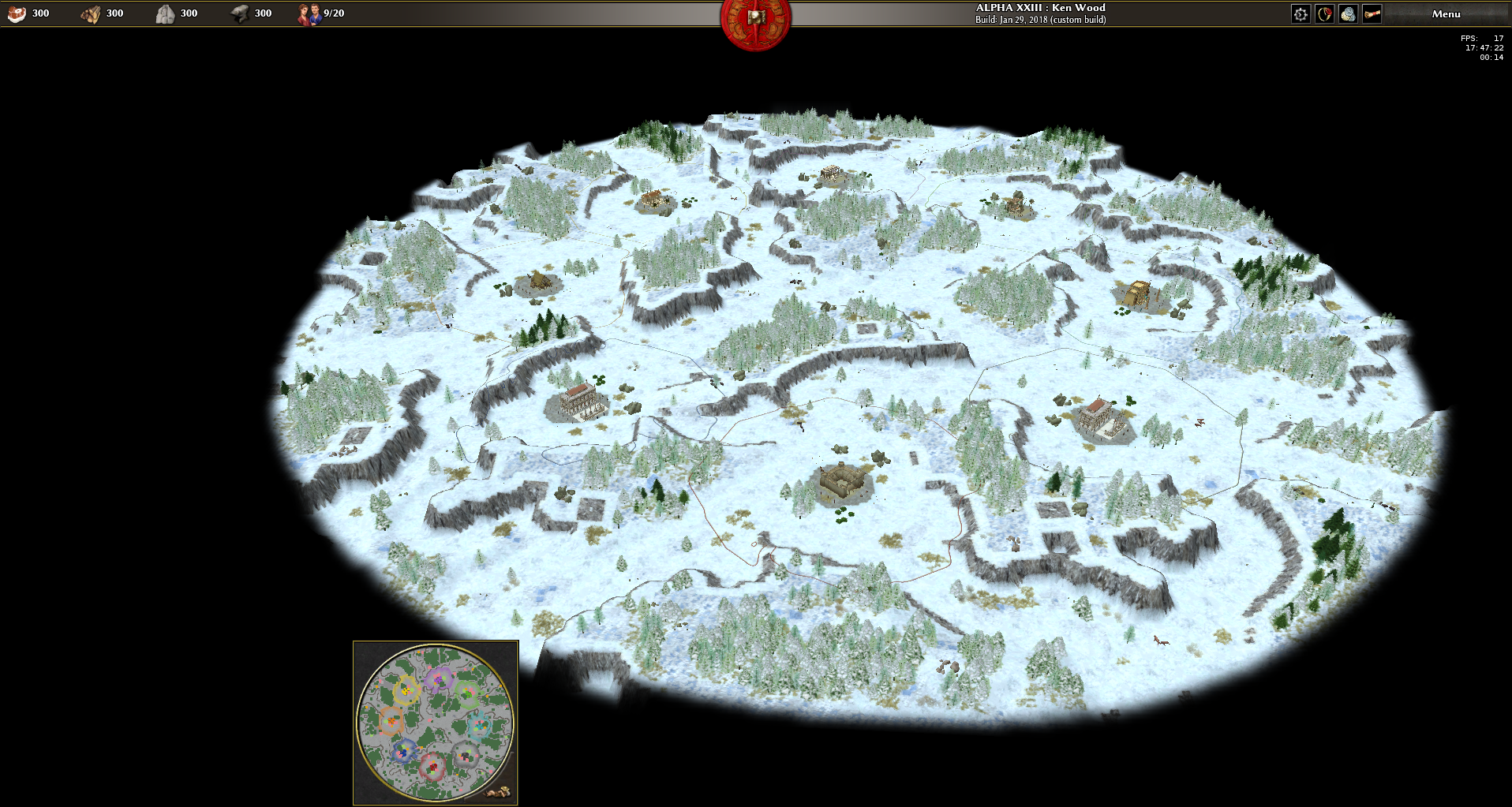 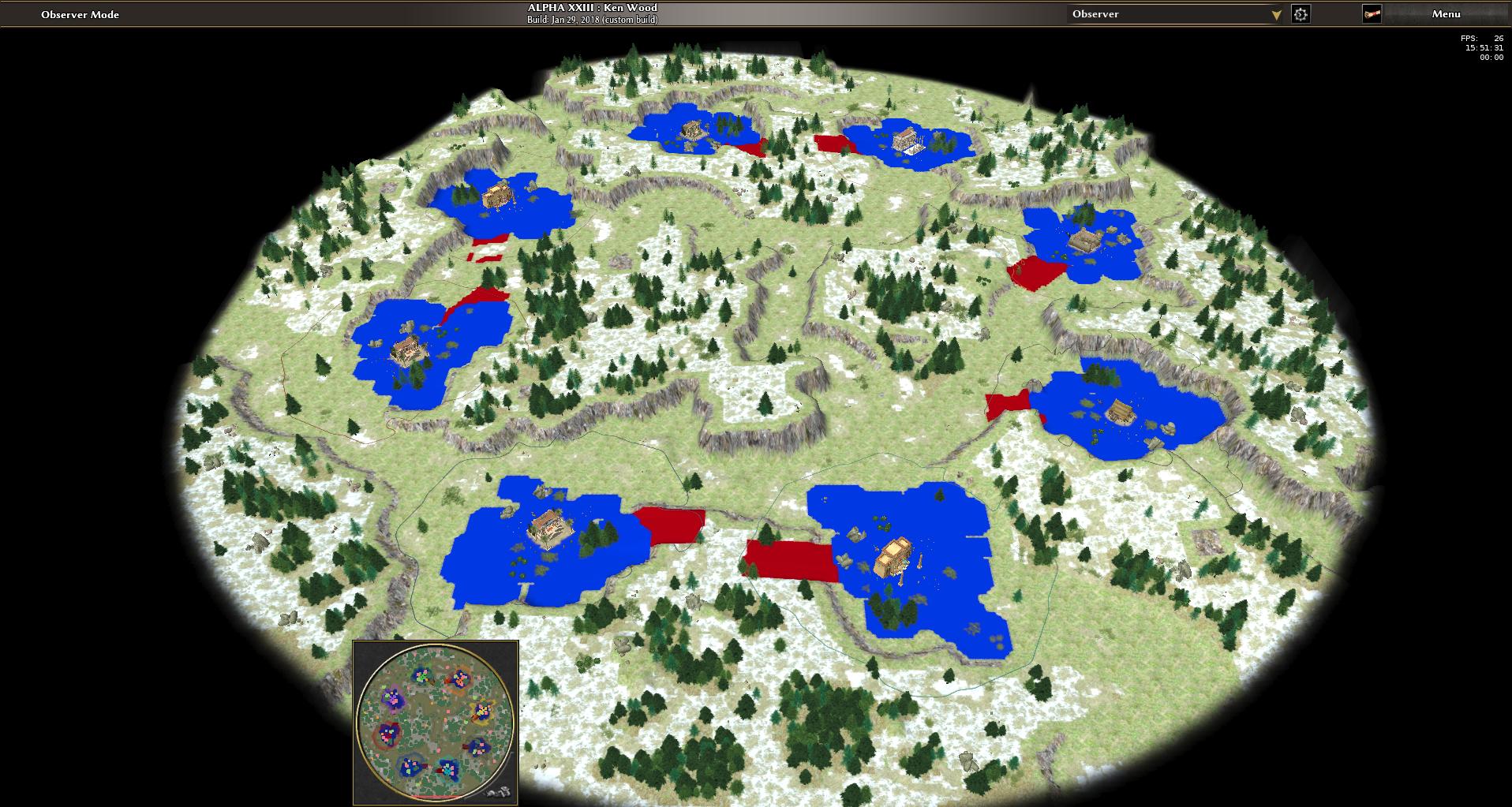 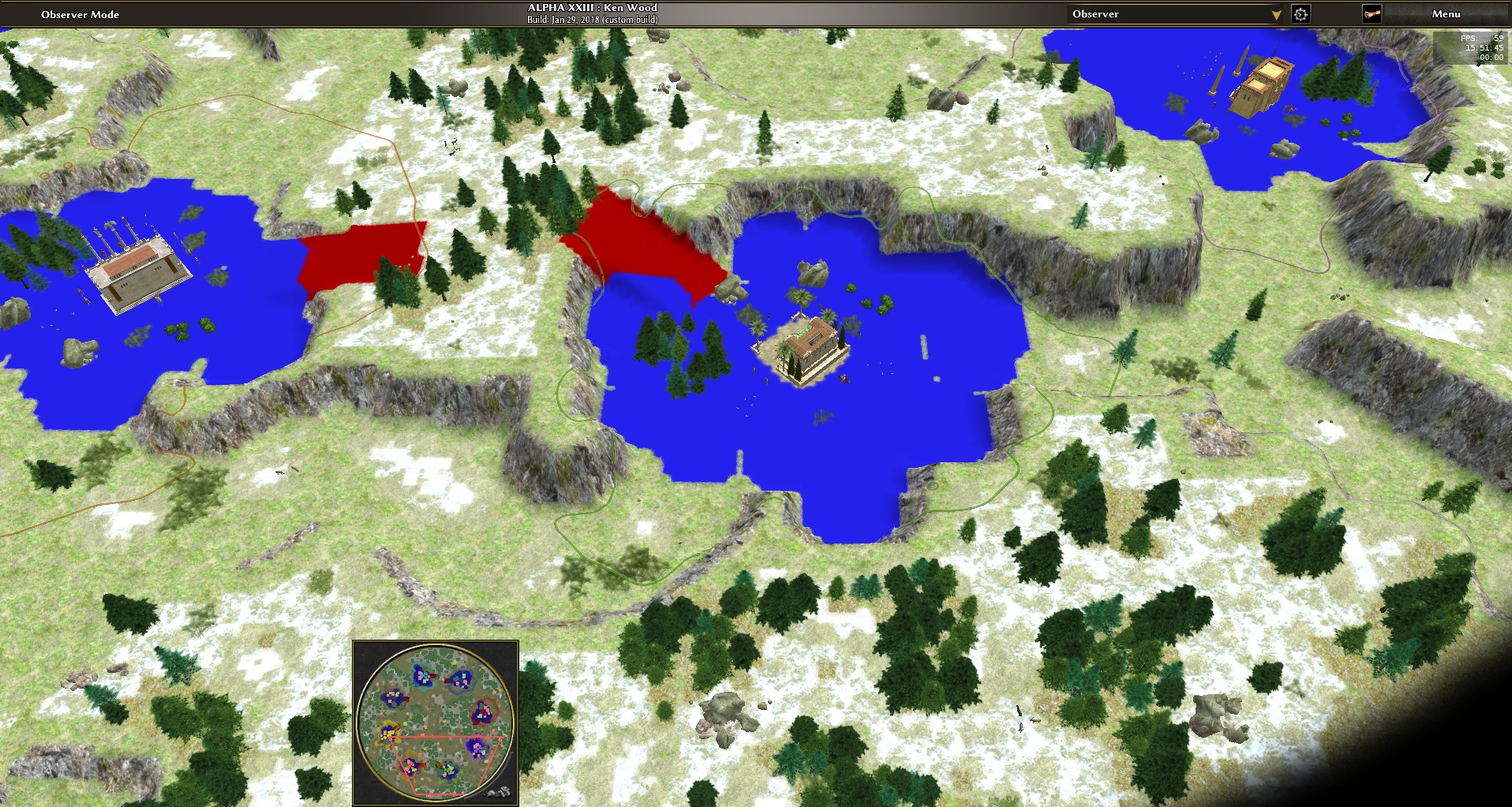 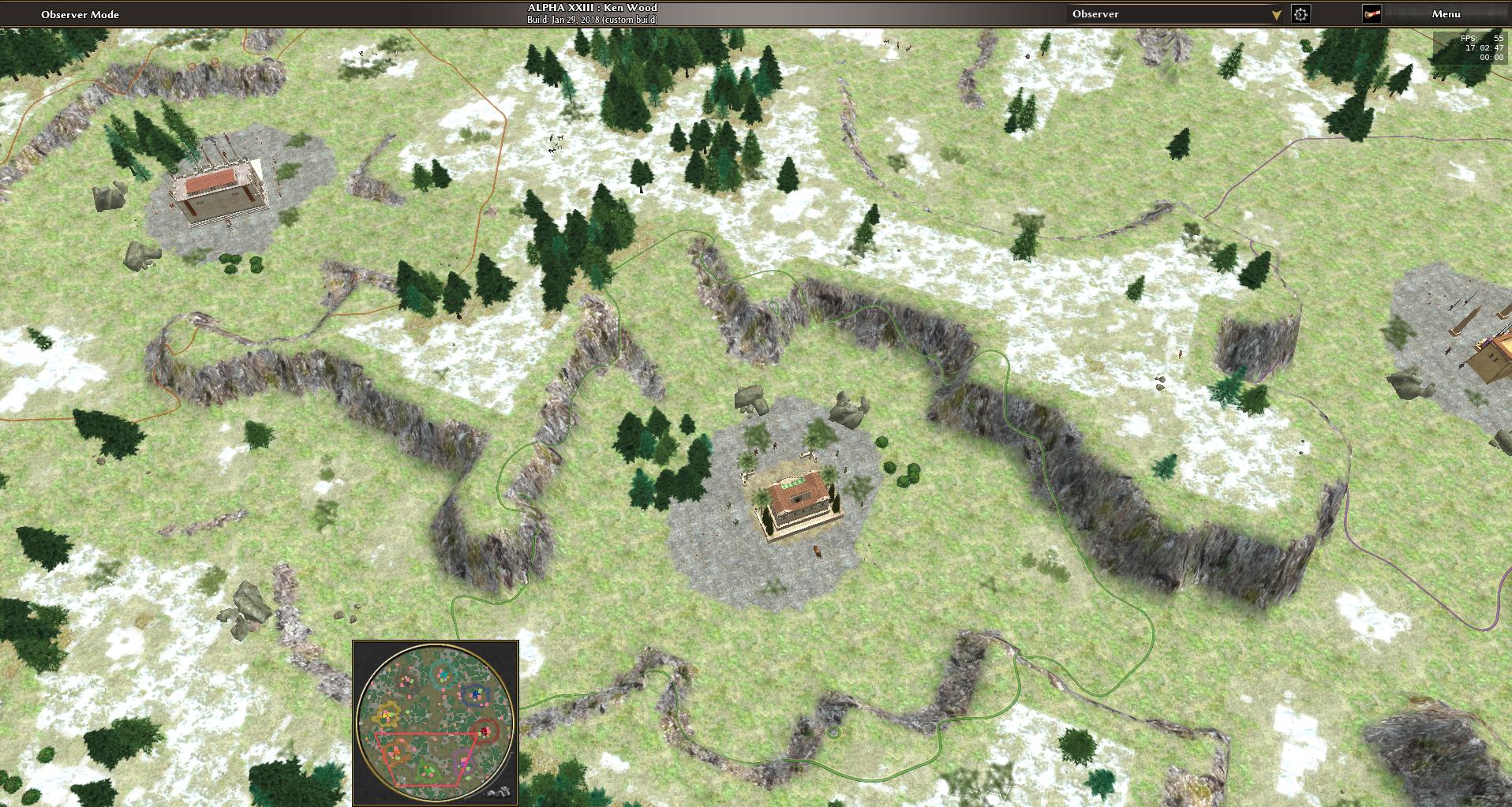 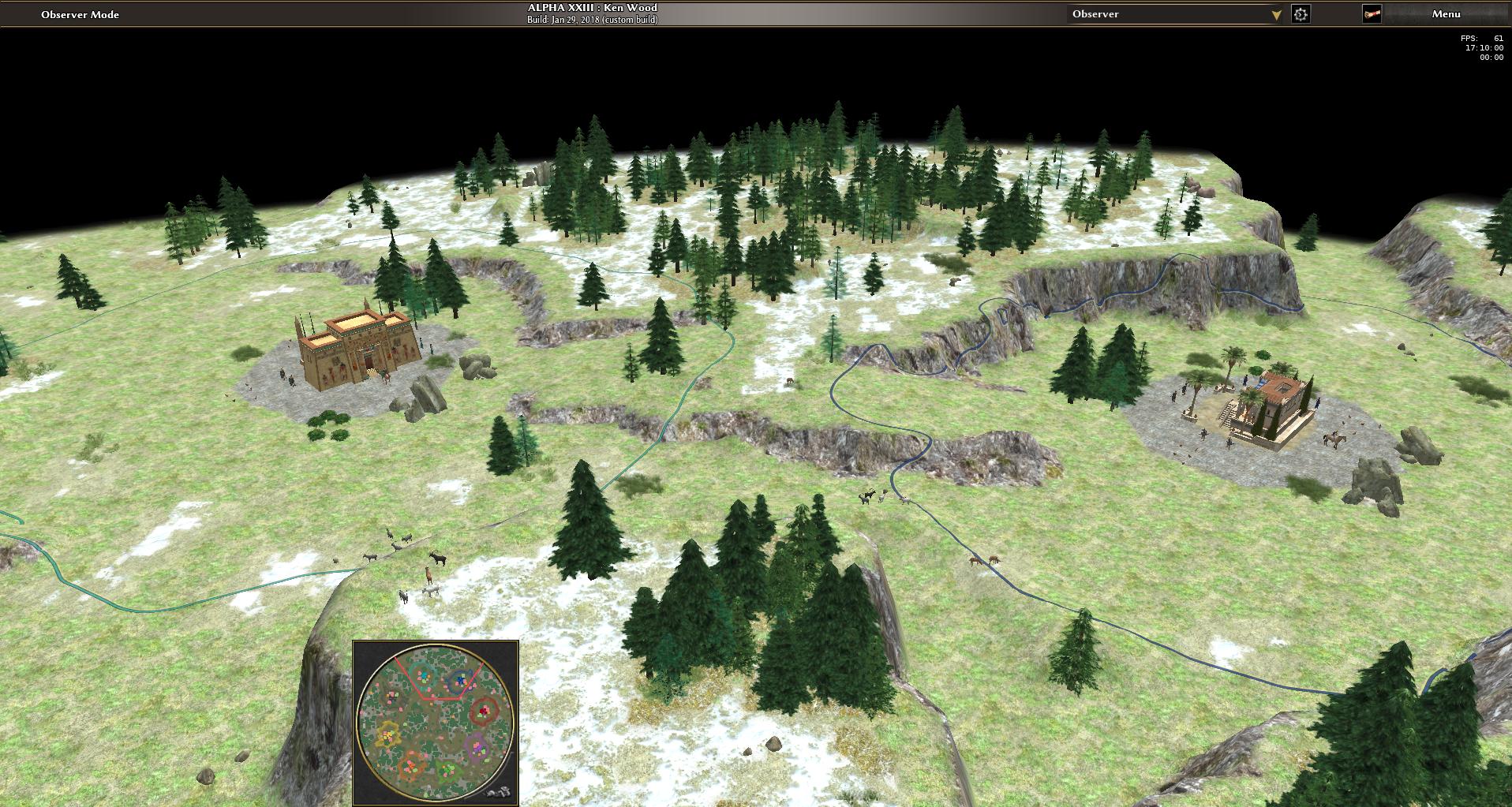 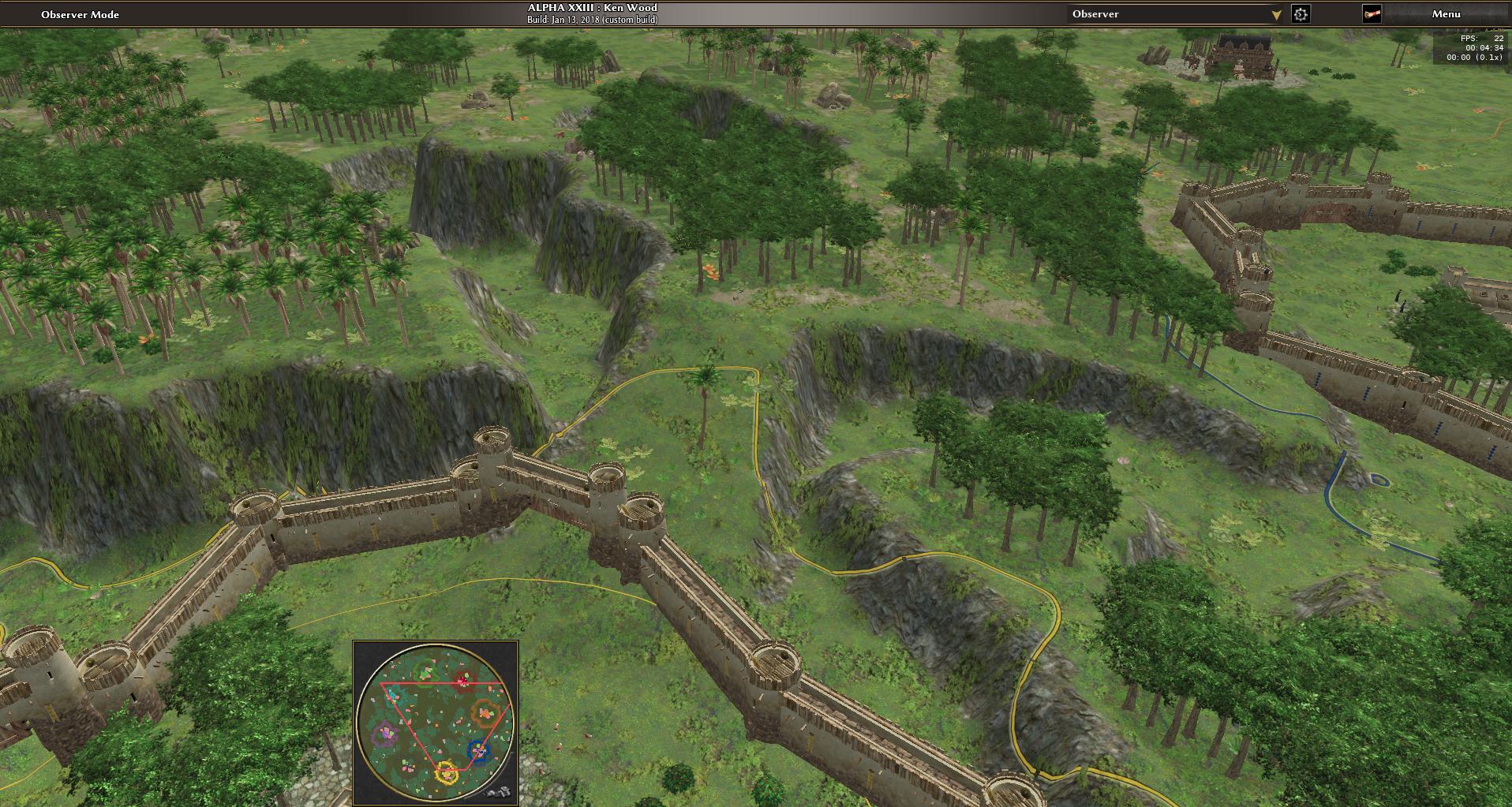 Ambush bluffs rework.
Remove ugly large circle patterns around the playerbase on Ambush, fixes #4993.
To ensure passability, create ramps from the playerbase to the bluffs.

Change the circular player avoidance to a ChainPlacer generating more heterogenous pattern.
Use vectors in rmgen2 bluffs creation and simplify equations, refs #4992.
Don't turn inaccessible bluffs to plateaus but don't place them until it is certain they are passable.

Increase minimum distance from the playerbase to the mapcenter by picking different distance values per playerbase pattern in g_PlayerbaseTypes.
Attempt to improve bluffs performance by avoiding bluffIgnore by 0 instead of bluff by 12, refs #5011.
Implement AdjacentToAreaConstraint and deleteTerrainEntity.
Delete createBoundingBox and use getBoundingBox, refs #4947, #4805.
Delete fadeToGround and nextToFeature and use conventional createArea calls with the SmoothingPainter of rP21175, refs #5027.
Paint bluff cliffs slightly more accurately using the SlopeConstraint from rP21085, refs #5004.

New mappreview images for Ambush and Stronghold, since the ugly circle patterns were removed in rP21300, refs #4993.
Fix missing word in a map description, reported by Sundiata.