Actor editor is a tool which provides a GUI for creating and modifying actors for the game. Since actors are stored in XML format, they can be edited in any text editor, but actor editor aims to be a more user-friendly method.

Actor editor is located next to the main pyrogenesis executable (pyrogenesis.exe on Windows), this location varies for a release install or SVN. If building the game yourself, you need to build Atlas too, since actor editor depends on it.

Note: Actor editor is currently broken on Linux and OS X, see #1553 and #1554. If you're not on Windows, you should use a text editor to modify the actor XML directly.

Here's an example of Actor Editor in use:

The interface consists of the following sections:

The menu has a fairly standard layout, where File allows you to create a new actor, open existing ones, and save the currently opened actor; Edit allows you to undo or redo previous actions.

These are per-actor settings that change how the actor appears in the game. Cast shadow determines whether the actor will cast a shadow, which is useful to disable for certain transparent actors like grass clumps. Float on water is useful for actors which should float on water (e.g. boats or water lilies) instead of conforming to terrain.

Material files are per-actor settings that describe how to render the actor with some combination of effects like the following:

Materials are located in art\materials\ (see mod layout). To create a new set of effects, you should create a new material. See MaterialSystem for more information.

The main purpose of the actor editor UI is to edit groups and variants, displayed as a table with editable rows and cells. Each row in the table is a different variant. Contiguous sets of rows are called groups, separated by empty rows. A variant describes some subset of the actor's appearance and behavior, which can either be selected by game logic or at random (based on a specified ratio/frequency). Each actor has at least one group with at least one variant.

The columns describe properties of each row or variant:

With the addition of rendering techniques like normal, specular and ambient occlusion mapping, there is now a need to support multiple textures per model. You open the animation editor by double-clicking the Textures cell for a given row/variant. 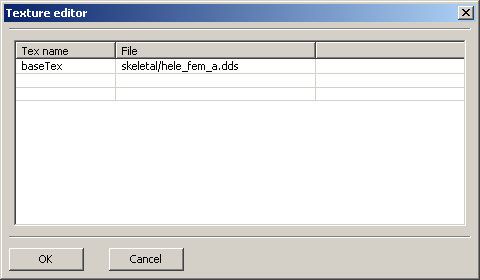 The texture type is specified with the Tex name field. Every actor should at least have a base texture ("baseTex") which is the standard diffuse or color texture. Other texture types are optional but may be required by a given material. 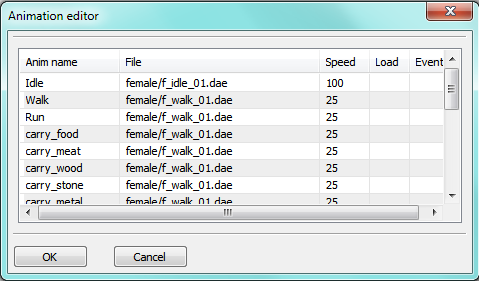 Each animation requires a name (Anim name), but it's generally best to choose one from the cell's dropdown list as the game expects them to be spelled a certain way.

The animation File's path is relative to art\animation\ (see mod layout). For a description of the other animation properties (Speed, Load, Event) see AnimationSync.

A single actor variant can also have multiple props (other actors attached to a given node on the model). You open the prop editor by double-clicking the Props cell for a given row/variant. 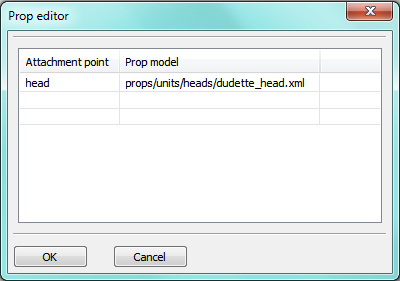 Each prop references an Attachment point, which names the node on the actor's model where the prop gets attached by the game. The dropdown list for this cell contains some of the most common attachment points.

The Prop model may be left empty if the prop point should have no actor attached (e.g. an idle worker will have empty hands), or an actor may be referenced. The path is relative to art\actors\ (see mod layout).

General controls for the editor windows: