Part of the 0 A.D. Gameplay Manual

This document is WIP (work in progress), hopefully it's already useful, but more info will be added as the game development progresses. 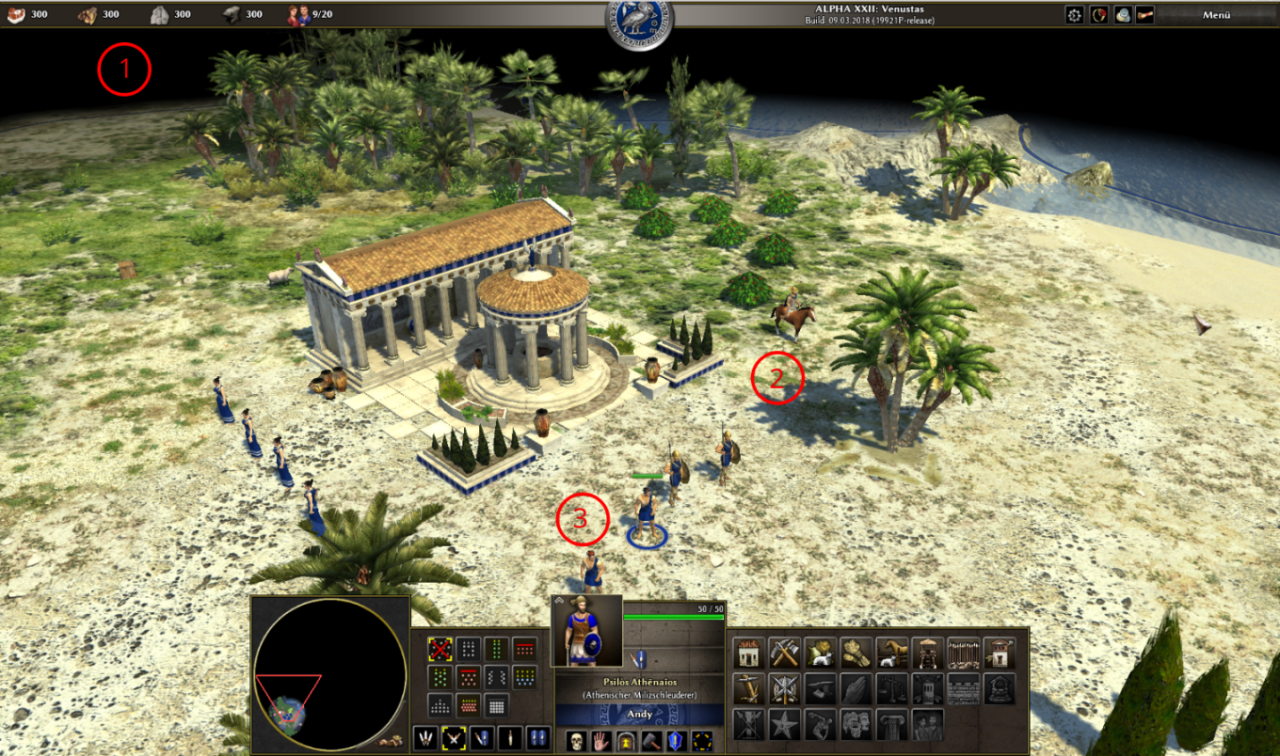 After setting up a game (and clicking on the Start game button) you'll see your first units and buildings. In most cases it will be something like in the image above: you will have a Civic centre, perhaps a few houses or similar, and a couple of basic units. You may want to take a few moments to experiment moving the units around and selecting things etc. See the HotKeys page for all ways you can use your mouse and keyboard to interact with the game, but here are some of the most important:

The Civic Centre you have from the start is a dropsite for all resources, later you'll build other dropsites where your units will only leave some types of resources, where the units will go and drop the food they've gathered. Then they will go back to gather the rest, after they've gathered all food from an animal or a berry bush they will try and find another nearby and start gathering from that. If they cannot find any they will return to the nearest resource dropsite and wait for new orders from you there. You gather the other resources in the same way, wood from trees, stone from rocks and metal from metal mines. The cursor will change to the food, wood, stone, and metal symbols when over an object that will give you that resource, so if you have trouble finding metal move the mouse around until you see the anvil shaped cursor for example.

To explore the map and reveal where resources are, where the enemy is, what the enemy is doing etc, you send units out to scout. At the beginning of the game this is mostly to find where resources are and to get an idea of what the map looks like under the Shroud-of-Darkness, but as the game goes on it becomes more and more important to find out what the enemy is doing. What kind of units is he building, where does he build new buildings to quickly be able to create new units near you, from which direction is he attacking you, etc. The best unit to do this with is the cavalry unit ➁ that the game provides you with at the start- its extra speed not only speeds up the process of covering the map, it can also more easily remove itself from danger if it encounters some unexpected resistance.

As a last resort, it is quite possible to garrison ordinary buildings with your workers and soldiers, but this is to be avoided when possible. while it does protect your workers and allow them to more effectively defend themselves, it takes them out of the fields and mines, slowing down and even stopping the resource-gathering that is necessary for victory. Walls and towers do more than delay the enemy- they force the enemy to stop and defeat your defences rather than leave them able to strike directly towards your centers of production.

While each civilization has its own specifics, as far is its individual units are concerned, they can generally be broken down into a number of specific types. Swordsmen are effective against spearmen, but suffer when fighting cavalry. Spearmen are useful against melee cavalry, but generally do poorly against swordsmen. Missile troops can come in both infantry and cavalry varieties, and their effectiveness against other units can vary on whether they are bowmen or javelinists. While it is best to check the particulars of the units from our own particular civilization, but it is always a good idea to cover all of your weaknesses and also remain unpredictable- leaning on one unit for all your duties invites disaster.

Stances are purely for behavioral purposes, the game currently lets you choose between five different stances for military units.